When visitors arrive in Marbella they usually visit popular places like Puerto Banus or Marbella’s Golden Mile. But what is there to do in the Marbella old town? This is where you will find the authentic charm of the narrow and beautiful streets decorated with flowers and the traditional Andalusian atmosphere.

Marbella’s Old Town, also known as the “Casco Antiguo” is lined with shops, cafes and history…you should not leave Marbella without taking a stroll amongst its historic buildings and soaking up the fragrance of the orange trees.

Top Things To Do And See In Marbella’s Old Town

Old Town Marbella also known as the Casco Antiguo is an exquisite whitewashed traditional Andalusian village with cobbled streets, lined with fragrant jasmine and orange blossoms, narrow pathways, quaint shops, boutiques and cafes.
On your tour of the Old Town Marbella, you will find a mix of Moorish architecture blended with Spanish tradition and it is one of the highlights of visiting Marbella.
Here is a list of the what you can find in this enchanting town. 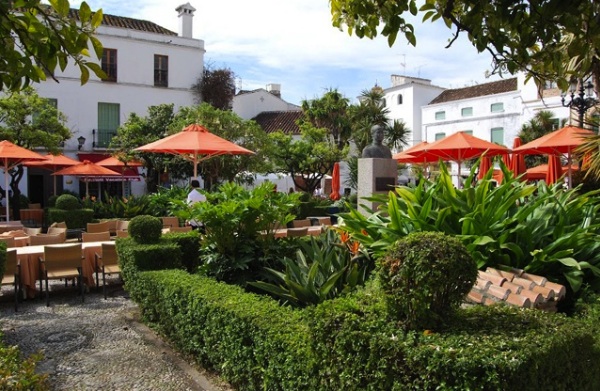 This is the most well-known square in the old town and its emblem. Also known as “Plaza de Los Naranjos” or “Orange Treet Square”, as its name suggests, is covered in orange trees that engulf the town in its wonderful aroma. It is merely 100 meters north of the main road Ricardo Soriano and the Alameda Park.

Orange Square is the administrative centre of Marbella and a local gathering point. In the 6th – 15th century it was in Arab hands and in 1485 the Catholic Monarchs transformed it into a Castilian neighbourhood with beautiful renaissance style architecture, administrative buildings such as the Town Hall and the Magistrate’s Court, the Chapel of Santiago and the main square.

It is the perfect spot to sit in one of the many cafes, soak up the ambience, the orange blossoms and watch the people walk by.

You can even try “churros” – a Spanish doughnut style stick normally eaten with sugar and dipped in hot chocolate served at breakfast.

The Town Hall (Ayuntamiento) is on the north side of the Orange Square. The building was constructed in the 16th century in the Renaissance style of those times with an antique sundial, decorative shields and headstones with inscriptions in Old Spanish.

Quick tip: Pop into the tourist office at the Town Hall to pick up brochures on Marbella’s local attractions and a map of the city. 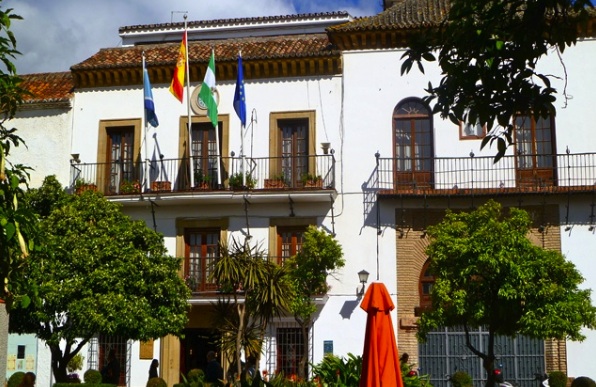 You can find the oldest building in Marbella on the Orange Square – La Casa del Corregidor (Magistrates Court) which was built in 1552. You will recognise it by its beautiful arches on the top floor, stone façade and a mix of Renaissance and Gothic arquitecture.

A little further from Orange Square along Trinidad Street you will find the remains of the Arab medina walls. There is not much to see anymore but you can see the ruins and what is left of the Roman capitals that were used in the construction. You can follow the falls all the way down to Portada Street where it disappears. 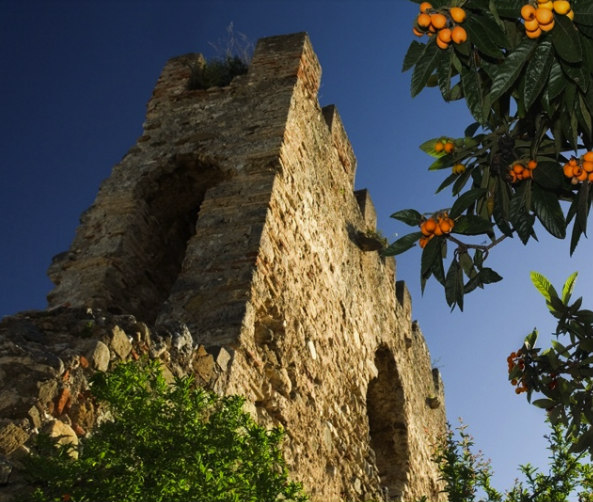 5. The Museum of Contemporary Spanish Printmaking

Located on Hospital Bazán Street you will find the 16th century Gothic-renaissance style building that houses the “Museo del Grabado Español Contemporaneo” which takes its name from when it was a hospital for the city’s poor citizens.
In actual fact, it was originally the residential palace of Alcaide Don Alonso de Bazán which now exhibits art of the great artists of the 15th century to date. You will find works by Goya, Miró, Picasso and Dalí.

6. Church of the Incarnation

Close to the Arab walls on Church Square you will encounter a baroque-style church build in 1505, modified in 1712 and then again in 1756. This church is known as the “Parroquia de Nuestra Señora de la Encarnación” and houses one of the most famous organs built in Spain, the C Major organ (Sol Mayor).

Just south of the Incarnation Church you will find Saint John’s Chapel (Capilla de San Juan de Dios) also know by the locals as “Hospitalillo” located on Saint John Street.
Built by the Catholic Monarchs, its arquitecture is a blend of Islam and Christinary with arches and carved doorways amongst frescoes and religious works of art.
Interestingly, the building had its wood panelling hidden until the mid-twentieth century. You should stop and have a look while you are in the Old Town of Marbella.

8. Our Lady of Sorrows

Marbella is rich with religious tradition which can be seen decorating the alleys. One of these adornments is the Our Lady of Sorrows who stands in a niche on a balcony with blue shutters.

If you are looking to buy luxury property in Marbella or you are just visiting, Marbella Old Town is a must. Take a stroll through the streets on your own or join a local walking tour to experience the rich heritage of Marbella.

Tired Of Searching For Your Luxury Property On The Costa Del Sol?

Don’t waste any more of your time and use a personal property finder to do the hard work for you…and its completely free.

Send us your requirements and we will find it for you.

We use cookies to offer you a better browsing experience, analyze site traffic, personalise content, and serve targeted advertisements. Read about how we use cookies and how you can control them by clicking "Privacy Preferences". If you continue to use this site, you consent to our use of cookies.
Accept Privacy Preferences

This website uses cookies to improve your experience while you navigate through the website. Out of these cookies, the cookies that are categorized as necessary are stored on your browser as they are essential for the working of basic functionalities of the website. We also use third-party cookies that help us analyze and understand how you use this website. These cookies will be stored in your browser only with your consent. You also have the option to opt-out of these cookies. But opting out of some of these cookies may have an effect on your browsing experience.
Necessary Always Enabled
Necessary cookies are absolutely essential for the website to function properly. This category only includes cookies that ensures basic functionalities and security features of the website. These cookies do not store any personal information.
Non-necessary
Any cookies that may not be particularly necessary for the website to function and is used specifically to collect user personal data via analytics, ads, other embedded contents are termed as non-necessary cookies. It is mandatory to procure user consent prior to running these cookies on your website.
SAVE & ACCEPT

Book a call or a meeting

Send us an email